RE:WRITE by Who Cares? 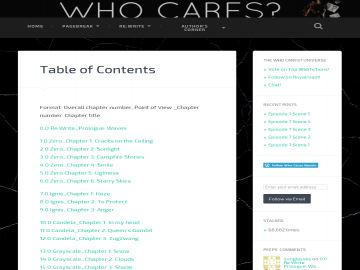 Audience: Mentally mature readers, people interested in the concept of power, japanese web novel lovers not looking for a light hearted fantasy story, people who are not afraid of crying.

If you had the power to rewrite anything and everything in the world -no catches, no limits- would it really be as amazing as it sounds? Fed up with a world where science has made every fantasy a reality and people just don’t care about stories anymore, a genius video game developer named Kai Zero, uses ancient black magic to transport himself into the first Role Playing Game (RPG) that he ever made – Choices. Disturbed by his powerlessness in the real world, Kai makes sure to give himself the ability to change this new world as he sees fit, literally. The world of Erath is locked into a perpetual war between the Holy Union and the Dusk Alliance. Ironically, the people of Erath find themselves unable to break free from their destiny and determine their own future as they continue to struggle and fight whilst being locked into a seemingly unbreakable stalemate. Join Kai as he sets off to explore this new world while coming to terms with his new power, and more importantly, with the effects his power could have on the people of Erath. Plagued by insecurities, making some very unusual friends with stories of their own, questioning morality in a world where there is no right or wrong, and slowly descending into the trappings of power, Kai’s journey is riddled with problems that make him seem vulnerable in a very different way.

RE:WRITE has not been reviewed yet.

RE:WRITE has not been recommended yet.