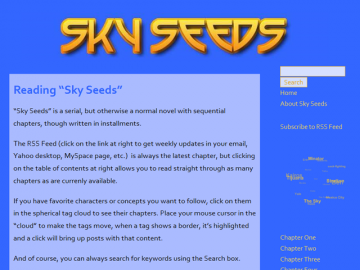 "Everything you know about human history is WRONG!"

And the only one who knows the true story is a teenaged Mexican streetpunk who deals dope, smuggles wetbacks, and breeds gamecocks in Tijuana. And he wishes he didn’t know.

Fatherless boys often have the fantasy of a Dream Dad showing up; rich, powerful and ready to pluck them out of squalor and insecurity into the lap of luxury. But when it happens to Ben, in spades, he has a hard time coming to grips with his Papá being from the outreaches of hyperspace. Not to mention being arrogant, selfish, and possibly a mass murderer. His blonde, blue-eyed father is back to rebuild the infrastructure of the planet (including the moving or rebuilding of the world’s pyramids to jumpstart the decayed power/communication system) that he and his people built in the first place—meaning also the creation of human beings. He plans on using Earth as a strategic base for his vague powerplay and wants Ben to run it for him. In a couple of years.

Years that Ben will spend not only as a student at Yale, but in private classes in The Sky, a extra-terrestrial, non-existent, hyper-projection where his father’s people—who think of themselves as the the only human race—now live. In the timeless, immaterial realm of the Sky, with its “Tubes” that transport people instantly from planet to planet, Ben is learning languages, arcane technology, and martial arts based on transporting people around as if by sorcery.

He quickly cuts his gang from the street into the deal, develops a love affair with a redheaded Yalie, and forms both friends and enemies among the blondes of The Sky. All against his father’s wishes. Rebelling against schooling and his father’s arrogance, Ben leads his pals Monke and Nabo out to other worlds, resuming their trafficking on a universal scale. Which only brings him to the attention of the poorly-understood government of “The Race”, to whom his father is an outlaw.

Ben is quickly trapped into making decisions that weigh loyalties to his blood, his friends, his people, and his planet against his own needs and desires.

“Sky Seeds” is the first of four novels which will see the main characters—including Ben’s mother and sister and various refugees he picks up in his interplanetary adventure—age into adulthoods of wealth and power…and larger conflicts.

Sky Seeds has not been tagged yet. Help others find Sky Seeds by tagging it!

Sky Seeds has not been reviewed yet.

Sky Seeds has not been recommended yet.