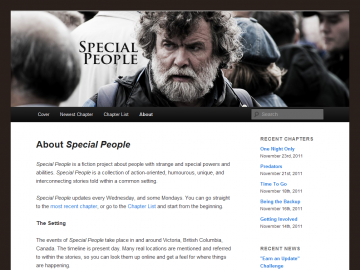 "The strange made natural"

After reading the first ten chapters of Tim Sevenhuysen's fourth Special People story arc, 'Hide and Seek,' my first impression remains – this is a well-written story that seems a lot more like urban fantasy than the superhero fiction I thought I was headed for. However, the talents of these special people are firmly in the superpower tradition, which goes to show just how close the two genres (or subgenres?) are.

I'll hasten to point out that the author never claims to write superhero fiction. The motto at the top of each page says 'Superpower fiction with a fistful of twists,' and superpowers don't have to belong to superheroes. Sevenhuysen's protagonist Naomi isn't foiling bank robberies and battling superheroes (not yet, anyway), she is trying to get away from people who want to hire or hurt her. I found the story a bit slow at times, but that could just be me. The characters and the world are engaging, and there are several descriptive passages that jump off the screen. The use of superpowers leaving 'the barest hint of that in-between sensation [...], like the slowly fading aftertaste from a strong drink'? Beautiful!

There are a few hiccups along the way. Naomi takes her jeans off twice after coming home, and although she fell backwards and skinned her elbows early in the story, she later finds scrapes on her knees. On a more basic level, I find myself wondering why so few are aware of the existence of special people in a world where, we find out, women with water powers are hired as gardeners. And when the super-powered Naomi meets what seems to be a telepath and a man who communicates with crows, why doesn't she suspect that they might be as special as her? The idea seems to be that there are only rumours about the existence of super-powered individuals, but if so, the police officer who sees Naomi appear out of thin air in chapter nine rather seems to UNsurprised. Surely an experience like that would send just about anyone to the psychiatrist?

Finally, one of the most fascinating parts of the story is how natural Sevenhuysen makes the utterly unnatural abilities of his characters seem. To Naomi, skipping six minutes and eighteen seconds into the future is as normal as raising an arm. Of course it is; she has done it all her life, and the reader understands that without any clunky exposition.

That's that. On to chapter eleven.