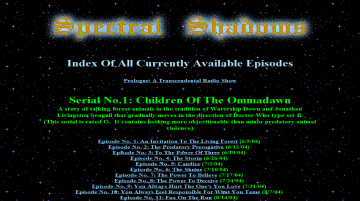 "The Planet Of Genetic Misadventure"

The planet Cygnus, once entirely devastated by genetic warfare, has re-evolved a species of half animal people who live in the shadow of the elder race of humans, about whom their understanding is incomplete and often distorted, resulting in some rather odd-ball religions and social habits, such as the town of Suburbia which based its way of life on black & white era TV shows, thinking the family values they exemplified to be representative of humanities highest achievement.  Other towns have adopted religions based on everything from fairytale concepts to gangster movies to feline totalitarianism.

Main protagonist Christine time travels from the far distant past to explore the many strange interpretations of her own society that exist in this sometimes quirky but often beautiful new world, while much controversy, mayhem and mystery arises during her visit.

Spectral Shadows has not been reviewed yet.

Spectral Shadows has not been recommended yet.