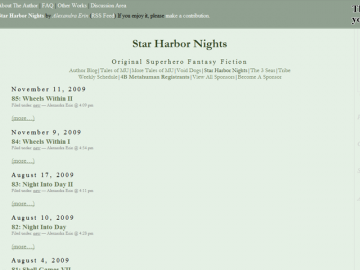 <strong>"Star Harbor Nights</strong> is an ongoing superheroic fantasy from the imagination of Alexandra Erin, set in a four color world of comic books… well, okay, there are a few shades of gray in there as well. Imagine a world that looks like ours, but where the entirety of Creation has been somewhat… tweaked, giving rise to women and men with extraordinary abilities. Superpowered genetic mutation, wondrous feats of magic, technological advances beyond our current imaginings… all are possible.

The original version of Star Harbor Nights began in the summer of 2004, chronicling the adventures of a group of heroes in the east coast city of Star Harbor. It initially centered around vigilantes Perfection Jones and Ray Vallenzio, known as the Fire-Eater. With some assistance from friends David Green (writing as Quinn Isley) and Sonya K. Dragon, a larger world began to take shape. The series was “rebooted” a couple of times before finding its footing, to untangle continuity issues and improve the overall quality."

Taken from the Introduction to Star Harbor Nights, (c) AE

Star Harbor Nights has not been reviewed yet.

Star Harbor Nights has not been recommended yet.