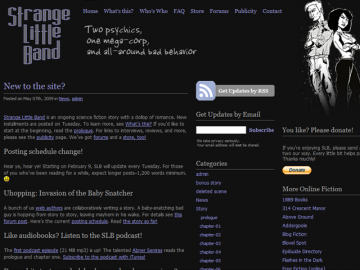 Addison and Shane are equally self-centered, and equally certain that they are going to get their own way. it is amusing to watch the two postulate, and try to manipulate each other, although in the end their son connects them.

The early chapters (all as of July 2009) are focused on the character building, and for me, what should have been the main focus - the Triptych agenda - was rather neglected. Hopefully later chapters will address this problem.

I felt like the sex (rather explicit in my opinion) got in the way of the story. Although it is perfectly reasonable that hormones may play a role, and that yes, the sex was important for illustrating how Addison and Shane’s relationship was progressing, I found it incongruous and distracting. Maybe I just wasn’t in the mood when I read it.