Tales of MU by Alexandra Erin 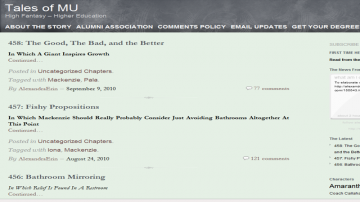 Tales of MU by Alexandra Erin product Read This
Permalink

"Worth Checking Out But Not Grabbing Me Enough to Keep Reading"

Tales of MU definitely started out as entertaining, and I appreciate how Alexandra Erin brings non-mainstream sexualities and genders to the forefront through her main characters rather than through supporting characters or cameos. I think this kind of openness is instrumental in getting non-mainstream sexualities and genders on the radar, because honestly, for most people they aren’t. Some readers might be put off by it, but others may feel their perspective shift as they read about colorful and interesting people trying to figure out their own lives. This story was a catalyst for my own understanding of these issues.

A five-day-a-week update schedule has a certain allure, but even as a slut for detail, I found the sheer amount of information presented about every day (or even every hour) of Mac’s life overwhelming. I also feel like the quality of the writing has suffered for it, though Erin has both talent and an eye for dialogue. I enjoyed the twists on classic fantasy concepts, though at other times I was turned off by the extreme parallels to the modern, industrialized world. That’s a matter of preference, though, not quality.

I eventually stopped reading just because of the inordinate detail and my flagging motivation to wade through it all to "find out what happens."

I think Tales of MU is worth a look, and is noteworthy for its role in the webfiction movement.