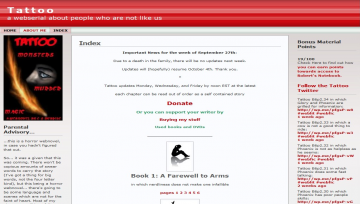 "The travails of one magically protected, ass-kicking nerd" permalink

So far I have only read as far as the end of Chapter Six of Tattoo by Candace McBride. This isn’t because I don’t like it, but simply that I haven’t had chance to read Chapter Seven yet. Tattoo bills itself as Horror with science fiction and fantasy elements, but I find it’s more Dark Fantasy with Horror elements so far.

1. The characters. Glory is an awesome, magically protected, ass-kicking nerd. Yes, you read that right. She’s a nerd and she kicks ass. She’s also has a past which makes her socially awkward. Glory is the protagonist and the rest of the characters get much less screen time. But they are beautifully rounded (the non-antagonist ones anyway).   2. The Episodic format. So far each Chapter is a single sub-story posted over several updates. This really works well. You could start at the beginning of any chapter with minimal confusion. Whether thus changes after the main plot about Lori’s theft of Glory’s book comes back in remains to be seen, but as of Chapter Six it’s true.   3. Chapter Six – Supernatural Horror meets Welsh Myth as Glory tries to save a group of people from the Otherworld. I adore this chapter. It’s a fantastic story in its own right. If you read nothing else from Tattoo read this one.   4. Especially in Chapter Six the writing is evocative.

1. The start does not work for me. It seems unlikely that someone as intelligent and socially awkward as Glory would agree to go with Aaron on a date when he comes across as a stalker. Her brains should have warned her off even if her social anxiety didn’t make her run a mile from his forwardness. Then there’s the evil twin stealing the magic book (yeah an evil twin). That’s pretty corny as well. Once you get past chapter two though the story starts to work much better.   2. Cliche Antagonists – I mean an evil twin? Really? The same goes for the other antagonists – none of them seem to have any sort of personality. Even the cop causing trouble for Glory because he thinks she’s up to something nefarious is a thoroughly unpleasant person who’s colleague’s dislike him. Perhaps it doesn’t matter so much in Horror, but I like antagonists who also develop as characters.

Tattoo is well worth a look in spite of the flaws of the first two chapter. I really enjoyed it. I would have given it 7 stars, but Chapter Six raises it to 8 (and chapter six on its own rates 9).

This novel is great! While there are only 4 chapters so far (13th October 2008), what is there will leave you wanting more.

If you like the occult, or have a liking for vampires, werewolves, malevolent toad gods and the like, this is the novel for you.

The author has thoughtfully included links to other webpages describing some of the ideas that she has included.

I was thoroughly impressed by the author’s style of writing, and while the chapters often seem to have a little too much internal angst from the main character, the morals behind some of her actions are exemplary.