Thalia's Musings - A Snag in the Tapestry by Amethyst Marie 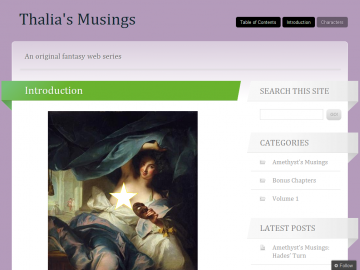 "Thalia, Muse of Comedy narrates the comedy, drama, and tragedy of the ancient Greek pantheon. But when Thalia becomes more than an observer, the Fates take notice."

Thalia and her eight sisters have been ordered by Zeus to leave their home on Mt. Helicon and move to Mt. Parnassus under the governorship of the god Apollo. When Thalia and Apollo raise a cursed nymph from the dead, Thalia starts to wonder if the Muses have greater powers than anyone realized. The Fates, threatened by this possibility, put her to a test. Are Thalia’s powers limited to helping mortal playwrights hack out a comedy sketch, or can she create happy endings in real life, even for the gods? The Fates want to know.

But Thalia cares less about the Fates’ games than the behind-the-scenes drama of the Olympian royal court. Why did Apollo kill the Cyclops, Zeus’ minion? Why did Zeus give Apollo such a light sentence? And with the Cyclops dead, who will resupply Zeus’ lightning bolts when they run out? Will Hera then make her move for Zeus’ throne, or will she be too busy torturing his latest paramour? And what will happen to the Muses when said paramour is one of them?

A Snag in the Tapestry is complete. Thalia's Musings continues with Volume Two, Snarled Threads.

Thalia's Musings - A Snag in the Tapestry has not been reviewed yet.

Thalia's Musings - A Snag in the Tapestry has not been recommended yet.