The Aphorisms of Kherishdar by M.C.A. Hogarth 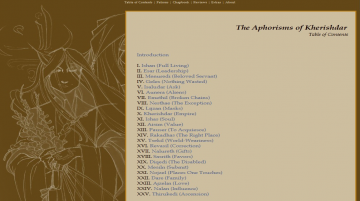 The Aphorisms of Kherishdar by M.C.A. Hogarth product Read This
Permalink

"Ungrounded but Compelling and Beautiful"

I was extremely intrigued (and excited) about the premise of these stories: A culture where prescribed social interactions and a caste system are healthy social dynamics. I’ve always been fascinated by caste worlds in fiction, from the Dragonriders of Pern to the Black Jewels Trilogy, where everyone has an intrinsic place in the social order and a sense of belonging there, and the complex and fascinating social interactions that ensue. I’m also personally interested in exploring ritual interactions laid down by generations of tradition, and I’ve always wanted to experiment with that in a culture that resonated personally with me.

Aphorisms didn’ t give me the latter as I’d hoped, but it gave me plenty of food for contemplation. It became clear very rapidly that the Ai-Naidar are hierarchical, urbanized, and civilized, which are not only pretty stock fare for sci-fi and fantasy, but which are, for lack of a less dramatic term, anathema to me. The narrator, the Calligrapher, explicitly states that the purpose of writing these stories is to show outsiders how their culture can work for them, when those same structures are so destructive for outsiders (including humans, presumably).

The author seems to approach the subject from a very morally relativistic perspective: ‘What works for them works for them. They’re different from us. If we judge them we are only being culturally near-sighted.’ In my personal perspective I have one foot planted in cultural relativity, and the other firmly grounded in my own personal experience. I believe objectivity is an illusion. I can only examine things from what I know and have experienced. So when I read Aphorisms, it was not without personal reactions as the characters repeatedly reaffirmed and glorified the strict conformity of caste and rank, held in check by public shamings and psychological reconditioning.

Aphorisms is, however, full of concepts that resonate very deeply with me as well. They have a separate concept of touch and sexuality with its own word and social place. They have an unpretentious ease with children. There is an amazing intimacy achieved between characters through an intrinsic knowing of their place in the world and being able to navigate social interactions by that knowledge. The imagery of calligraphy, and calligraphy as a form of healing, has a breathtaking, simple beauty.

What I really appreciate about these stories is the internal conflict they evoked in me when I found concepts that deeply touched me in contexts that did not. The discomfort of this juxtaposition made me think, made me examine myself on a feeling level that has been very rewarding. And that is exactly what I believe the power of story is. Stories entertain, yes, but stories show us who we are, show us nooks and paths and places in ourselves we might not have found otherwise. These stories have that power.

Where the stories really fell flat for me was in depth of characterization. Twenty-five stories by the Calligrapher, some examining incredibly intimate moments, and I still feel like I have very little idea of who he is, even taking into account how he fully identifies as his caste and role in life. He was often portrayed in the role of wise-person that others go to for advice, and yet I have no idea how old he is (except that he is not an elder and is a father), or how he came to be in that role. I don’t know what his formative experiences were, what makes him the way he is other than the bones of his society.

I feel even more in the dark on this level about Ai-Naidar culture. The stories are almost completely ungrounded in the landscape. Cultures spring from their physical environment, and there are almost no references to nature or physical subsistence. The weather is rarely mentioned, the landscape other than the city described only once as ‘bucolic loveliness.’ I literally have no idea what their planet is like. I don’t know how an empire of five planets feeds itself, except that it involves farming at some point because of a single description of a field with a fence. I don’t know what animals populate their world, what stimuli in their evolution that would cause the Ai-Naidar to actually be different from us. It was extremely difficult for me to suspend my disbelief and find ‘They’re different and it works for them’ realistic without any of this information.

Even with this, I appreciate that the author explored the concepts they did consciously. Many people hop on the fictional totally-morally-okay empire train without an iota of examination. The author’s prose is gracefully simple and compelling, the emotional and interpersonal imagery gorgeous. I’m really glad I found Aphorisms, and the inner exploration reading it triggered.