The Black Sheep Prince by dogber7 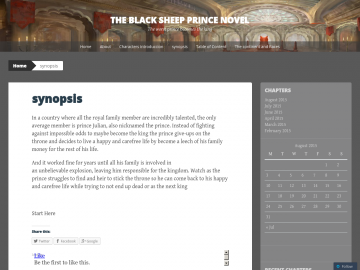 "the worst prince becomes the king"

In a country where all the royal family member are incredible talented, the only average member is prince Julian, also nick named the prince. Instead of fighting against impossible odds to maybe become the king the prince give ups on the throne an decides to live a happy and carefree life by become a leecher of his family money for the rest of his life.

And it worked fine for years until all his family is involve in an unbelievable explosion, leaving him responsable for the kingdom. Watch as the prince struggles to find and heir to stick the throne so he can come back to his happy and carefree life while trying to not end up dead by all kind of problems.

The Black Sheep Prince has not been reviewed yet.

The Black Sheep Prince has not been recommended yet.