The Ddro by M.E. Traylor 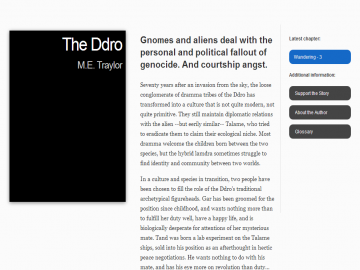 "Gnomes and aliens deal with the personal and political fallout of genocide. And courtship angst."

Seventy years after an invasion from the sky, the loose conglomerate of dramma tribes of the Ddro has transformed into a culture that is not quite modern, not quite primitive. They still maintain diplomatic relations with the alien --but eerily similar-- Talame, who tried to eradicate them to claim their ecological niche. Most dramma welcome the children born between the two species, but the hybrid lamdra sometimes struggle to find identity and community between two worlds.

In a culture and species in transition, two people have been chosen to fill the role of the Ddro's traditional archetypical figureheads. Gar has been groomed for the position since childhood, and wants nothing more than to fulfill her duty well, have a happy life, and is biologically desperate for attentions of her mysterious mate. Tand was born a lab experiment on the Talame ships, sold into his position as an afterthought in hectic peace negotiations. He wants nothing to do with his mate, and has his eye more on revolution than duty...

The Ddro has not been tagged yet. Help others find The Ddro by tagging it!

The Ddro has not been reviewed yet.

The Ddro has not been recommended yet.