The Five Kingdoms by Zachary Tringali 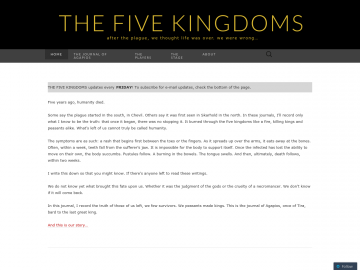 "After the plague, we thought life was over. We were wrong..."

THE FIVE KINGDOMS begins five years after a plague has devastated the kingdoms. The survivors live in constant fear that whatever god or power wanted humanity to end will return one day.

After the plague, they thought life was over. But they were wrong.

The world is changing. The Thanes have come across the coast to claim new land, and each person they kill they offer in tribute to the gods they're trying to call back to the land.

Now, the survivors of a once great kingdom called Tira are forced out of their home by the Thanes. Refugees, they must go out into the world and seek allies.

If the Five Kingdoms want to survive the next great catastrophe, they'll have to work together. If anyone else is left alive.

The Five Kingdoms has not been reviewed yet.

The Five Kingdoms has not been recommended yet.