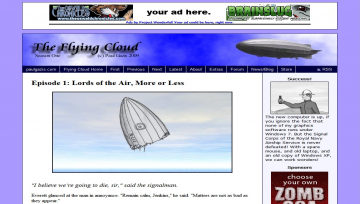 "A Gem of a Story" permalink

I was drawn to this listing because of the title . . . and because, let’s face it, airships are awesome. I kept reading (currently up to ch.18) because, while the airships continued to be awesome, the writing is equally excellent.

In yet another example of a great hook, the story opens with an airship crew (our protagonists), struggling to stay alive as their decimated airship begins to lose altitude over the ocean. The action rarely stops from there, moving on to exotic islands and onward to other adventures.

Framed as as an alternate reality story in which the Great War ended in 1916, airships developed and aeroplanes are toys for show, the world is well-thought out and fascinating, with fine details ranging from the not-quite-modern views of many of the crewmen to the precise technological innards of an airship. The crew are well-defined, the dialogue well-done, and Captain Everett is a more than suitable hero.

My main negative point is the lack of strong female characters. True, the setting is a military one, and in the early 1900s a lady would hardly be expected to go about cavorting, but the lack of more than one female character is sorely felt. Sarah, the only female character so far, is a bit of an untrusted oddball and so far doesn’t have much depth.

The site is easy to navigate, with a table of contents and buttons to proceeding and preceding chapters, and illustrations for each chapter. I recommend more people give this neglected gem of a story a chance.