The Ghosts of Earth by Paul Dore 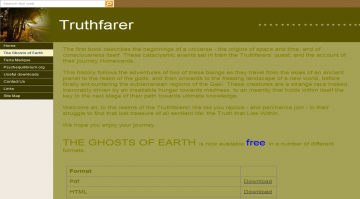 Almost any story that that begins with the birth of the universe is going to interest me. I love it when people give that kind of context to their stories, and I enjoy different people’s takes on the various theories of creation, how they occurred and physicality and/or spirituality of it.

I find the use of language clunky, though, and reminiscent of something written in the 1800s. I can’t tell if this was the author’s intention, though, and if it was, I’m not convinced it works. The formal language and idiom don’t flow for me. I like the blend of "I-am-there-watching-creation" perspective on the prevailing scientific theory of the creation of the universe, and how it segued into a myth structure common to many cultures around the world. I think the actual text, though, could be cut in half and serve the story much better. There’s so much there it’s hard to get through, and the concepts lose their punch. Also, breaking up paragraphs would really, REALLY help readability.

Like the previous reviewer, I haven’t actually managed to get to the actual plot, but I’m still intrigued.

It obviously took commitment and passion to finish this behemoth. I feel like the story is intended to be artful, and that some radical cutting would allow that to shine through.