The Inheritance: Afflictions by Darkthorn 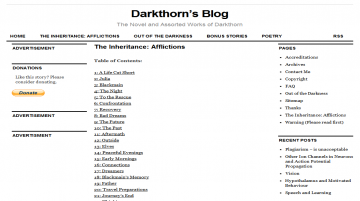 Chapter 1: A Life Cut Short As the man approached the council room, the king was becoming uneasy. The other advisors had left earlier, but the King had wanted to take stock of his assets. His ten finest men guarded the room, two at each window, four at the door, and two standing at his back. The King knew they were trustworthy, he paid them enough, he didn’t fear them - no, it was a feeling at the back of his mind. Many of his people had been dealing with the commoners, his spies had told him of the unrest in the surrounding countryside. The new taxes had created some famine, but it was important to support the army. One didn’t want one’s army turning on its own King. The King returned to his counting. The treasury was looking good, a war would be easy enough to maintain, keep the young men occupied and away from trouble. The only problem was that bride of his, nothing but a nuisance. Julia was too quiet, not enough fight and entirely too skinny for his taste. Her use for producing a fragile diplomacy was nearing its end. He didn’t need her, the local tavern wenches were happy enough to satisfy his desires for an extra pretty dress for the wardrobe and a couple of his coins. His wife never commented on the dresses being gone or guessed his purpose when he ordered Julia new clothes. Julia was known to send them to the poor, a couple here and there even if they were concentrated in the bars wouldn’t be noticed. The King decided it would be best to have her set up for treason. That decided he prepared to leave.

The assassin knew that the King was still enclosed in the council room and the others would not be coming back. He had slipped quietly into their private kitchens and put a slight poison in their food - not enough to kill, just to send them running to the privies. He was here to kill the King, the others were of no concern. It was not his way to kill dumb innocents. As he moved up the stairwell, he began to tread carefully, the smallest sound would give him away to the guards.

Suddenly the door swung open. The assassin stepped back, the dimly lit hallway providing an easy background for his elvish cloak to imitate. The two guards at the entrance stood to attention. The King exited flanked closely by his guards. The staircase was too narrow for this to continue, that was why the assassin had chosen this spot to ambush the King. As the guards began down the staircase the King was exposed at the top. The assassin saw his moment and carefully aimed. One silver tipped arrow from the double bent crossbow and the king fell, shaft protruding from his neck. The assassin flew down the staircase, he could hear the guards coming down after him. It didn’t take them long to figure out where the killing bolt had come from.

At the bottom of the stairs, the assassin hid in a small alcove and waited for the guards to pass. The assassin went back up the stairs, stepping over the Kings body, spitting on it as he did. He followed the hallway to another window and climbed out into the black night. On top of the northern tower he let down a rope made for him by the finest weavers of the land, thin as horse’s hair and strong as spider silk. He climbed down and vanished.

In the days to follow, the assassin spent time in the inns and taverns of the surrounding countryside. The villagers believed that it was a ghost who killed the king, no one could believe that there was no king on the throne. At this, the assassin knew his job was safely done and he returned home to the Land of the Hill Valley.

The king was not killed for money by the assassin, but to save the people from his harsh rule. The assassin’s real name was unknown, but he was called Blackmain. His name was gifted to him of the people, who saw him at night, slipping mysteriously through the trees. He lived on the dark side of the valley, where the forest was thick. His home was small, with just two rooms, one a dining room and the other his bedroom. No one knew where he had come from, or his true purpose of living there. His stone cold face showed no expression, even when he visited the market place for food and other necessities, making the shop keepers drop the money and twitch nervously. Blackmain didn’t care to make friends with the villagers, they had nothing in common. No one knew he was an assassin for he kept cattle and horses, a fine set that he could breed from to make an honest living.

The Inheritance: Afflictions has not been reviewed yet.

The Inheritance: Afflictions has not been recommended yet.