The Kingdoms of Evil by Daniel M. Bensen 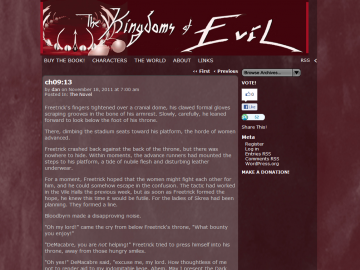 The Kingdoms of Evil was the first web serial I remember reading, and it was good enough for me to want to read other web serials. That being said, it has its flaws as well as its glorious moments. The humor in Kingdoms of Evil is hilarious if you like epic fantasy, otherwise it may fall flat. But the greatest obstacle to the readers enjoyment is the prologue, which has negligible relevance to the story. I would recommend just skipping it. Onto the main parts of fiction. Character Development: The author does a wonderful job with Freetrick and with Bloodbyrn. Their relationship and character arcs are fascinating. Bloodbyrns father and Mr. Scree are well developed as well. The character development in this completed serial is extremely strong for some characters, and negligible for other characters. I found myself skipping sections that weren't from Freetrick's point of view because the other viewpoint characters weren't well developed. Setting: The Kingdoms of Evil are as fascinating as they are dysfunctional. And they are very dysfunctional. Plot: The plots the different viewpoint characters are involved in don't interact much. Prose Quality: Spelling and grammar are okay. They're not an impediment to reading the serial. Sadly, the sentences don't often flow together well. In summary: Freetrick's point of view sections make the serial worth trying, despite other flaws in the work.