The Legion of Nothing by Jim Zoetewey 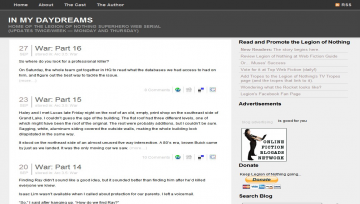 The Legion of Nothing by Jim Zoetewey product Read This
Permalink

"A fine addition to this genre"

You read the blurb and say "great, Iron Man goes to high school".  And it’s tough to get much love coming on with super heroes or high school.  With me it sure is.

But this transcends all that.  First of all, it really is well-written and has an authentic and engaging narrative voice.  The characters don’t have that "good animes get to become real boys and girls" feel about it.  It’s legit, is what I’m saying.

Also, the whole "find the armor, get jumped into the action" thing has been done a lot but isn’t as burned out as the "Twilight zone",  and "Buffy the Concept Killer".  And the fact that it’s a family heritage, rather than found floating somewhere like The Tuxedo or The Mask or…  is really helpful at adding dimension.  For one thing, it brings in other times.  ALWAYS good for stories like this.  If you can’t be immortal like Wolverine or Highlander, you can at least fall near to a warlike family tree.

It also brings in OLDER PEOPLE!  It wouldn’t be hard to get the idea that fictional preppies have never heard of World War II and might even think VietNam is near Iraq (geographically, that is).  But the link forged to an ancestor here, again, deepens the dimension.

A really nice piece of work that deserve reads and being mentioned by hipsters at comic cons.