The Lifting of the Veil by Chris Tejeda 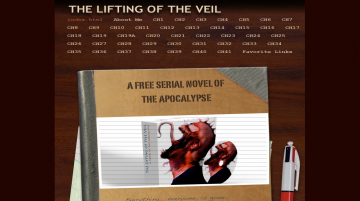 This novel’s initially slow start promises to build into a decent climax - which sadly, just didn’t happen for me. The age-old theme of the apocalypse is rehashed again, although the aliens seem intelligent and nothing is going to plan for the earthlings, the old idea of humans always winning out seems inevitable (what author would create his characters just so he can kill them off?)

The writing style seems somewhat stilted and unnatural, with the characters speaking very correct English. This would be expected of the President of the USA, but not of his childhood friend. The inclusion of harsh language grated on me, and although it was suitable for the mood of the piece, it didn’t seem to fit in very well.

The alternative viewpoints, basically a necessity because of the spread of the characters over the continent, were fluid and clearly marked.

Something I really enjoyed was the inclusion of images, presumably of the aliens coming to visit. They were detailed and somewhat Star-Trek like, but beautiful in their own way.

I’d wait a while before beginning reading this, there is promise in the chapters, and it is obvious that the author is just beginning to slide into the feel of his characters and bringing them to life slowly. Hopefully later chapters will build on the promise of the synopsis.