The Monster They Deserve by Chad Haakenson 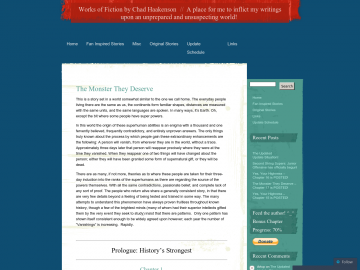 "How would YOU deal with being the most powerful person in the world?"

This is a story set in a world somewhat similar to the one we call home. The everyday people living there are the same as us, the continents form familiar shapes, distances are measured with the same units, and the same languages are spoken. In many ways, it’s Earth. Oh, except the bit where some people have super powers.

In this world the origin of these superhuman abilities is an enigma with a thousand and one fervently believed, frequently contradictory, and entirely unproven answers. The only things truly known about the process by which people gain these extraordinary enhancements are the following: A person will vanish, from wherever they are in the world, without a trace. Approximately three days later that person will reappear precisely where they were at the time they vanished. When they reappear one of two things will have changed about the person; either they will have been granted some form of supernatural gift, or they will be dead.

There are as many, if not more, theories as to where these people are taken for their three-day induction into the ranks of the superhumans as there are regarding the source of the powers themselves. With all the same contradictions, passionate belief, and complete lack of any sort of proof. The people who return alive share a generally consistent story, in that there are very few details beyond a feeling of being tested and trained in some way. The many attempts to understand this phenomenon have always proven fruitless throughout known history, though a few of the brightest minds (many of whom had their superior intellects gifted them by the very event they seek to study) insist that there are patterns. Only one pattern has shown itself consistent enough to be widely agreed upon however; each year the number of “Vanishings” is increasing. Rapidly.

The Monster They Deserve has not been reviewed yet.

The Monster They Deserve has not been recommended yet.