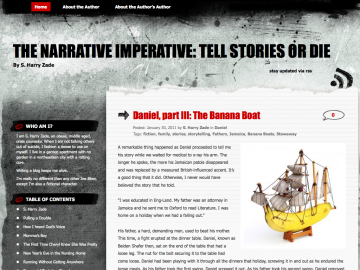 As an experiment in character creation, Keith Wilson's "The Narrative Imperative" is often very funny and insightful. The story purports to be a blog written by a suicidal psychiatric assignment officer named Harry Zade. Harry has been abandoned by his wife and children and doesn't have much sense of purpose left. As he says, "a long life is valued only by those with a life to live, or those who have not paid much attention to it and value life by habit." Harry's occupation leads him to pay too much attention to life, and his insights into his patient's struggles is one of the story's strengths. It's also the element that gives the story its pathos. Harry has all the theories about life that he needs - as a psychiatrist, he's something of an expert on the human condition. Yet none of that expertise seems to help him at all. Despite his knowledge and his wisdom he is still overweight and desperately lonely. He can analyze all the scars of his own childhood, but that doesn't make them go away.

Wilson has a good ear for dialog and Harry's insights into his patients lives are always fascinating and well written. There is also a very sly sense of humor operating behind this narrative, as evidenced in Harry and Cheryl's Christmas Eve phone conversation. Certain of Harry's posts act as small and beautiful essays on human nature, especially the recent post entitled "Joy." One of the strengths of that particular post is the description of Cleveland's West Market, which gives it a narrative richness that is sometimes missing from the rest of the work.

Which leads me to some of the difficulties that come from using a blog form to tell a larger story. For one, it's hard to follow a blog sequentially, and there are times when Harry himself abandons a straight chronological narrative to dip back into memory. This usually doesn't work. The post entitled Momma's Boy is a case in point. In the post, Harry talks about his past, and there are some very interesting bits about mother/child relationships and the behavior of domineering mothers. But the post centers around a Christmas scene that isn't drawn very sharply. We know its Christmas and that there are relatives around, but we're not quite sure who they are, or what they look like, or what their separate import in Harry's life might be. The post tries to present us with a big set piece, but the rest of the narrative works against big set pieces, since its filtered to such a high degree through Harry's current consciousness. It's as if Momma's Boy is attempting a different literary form, one that jars with the rest of the blog posts.

"The Narrative Imperative" is a good and sometimes enthralling read. In places it calls out for the services of a good editor, someone who could cut away some of the narrative's convolutions and make some of the sentences stronger. But these difficulties pale next to the interest I take in Harry as a character.