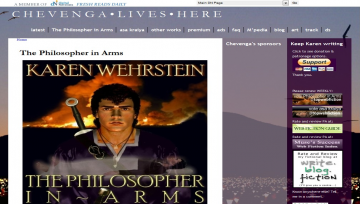 Philosopher in Arms is the best serial I have read so far online. Karen has had lots of writing practice (to put it simply), and it shows in her skill both in the nuts-and-bolts of her writing and in her storytelling. It helps that PiA is actually a revision & expansion of an already published story, but having read her other work, the completely new you-saw-it-here-online-first Asa Kraiya, I’m comfortable saying that Karen knows how to write a controlled plot. The story is also written in first person, so the world-building is done as a natural extension of the character Chevenga’s thoughts, dialogue, and interactions instead of big chunks of description.

I’ve seen the setting for PiA described elsewhere as "so far post-apocalyptic-it’s-back-to-swords-and-horses", which I like enough to repeat here ;-) It has a "soft scifi feel" in that it’s driven by character development and set in a realistic world, but it has fantasy elements like swords and horses and paranormal powers that are presented as in-the-far-future-science-will-give-us-these-abilities, but function in the story as sort of minor personal magics. The premise of the story is that Chevenga is writing his life’s story, revealing to his future readers for the first time the whole truth of his life, including the foreknowledge that he’s kept secret and has shaped his life since he was seven.

Chevenga almost seems a little too good to be true at times, but it’s more like flirting with the line of too much and never actually crossing it. Karen DEFINITELY puts him through challenges and strife in equal measure to Chevenga’s abilities (zomg does the poor guy suffer some times!), so there’s still plenty of room for him to make mistakes, grow, and go on all sorts of adventures all through out. I have never ever been bored by any of PiA, and more than once I’ve laughed out loud or gotten watery-eyed, because you really do feel like you’re right in there with Chevenga.

Fans of pieces like "The Intimate History of the Greater Kingdom," "Tales of MU," and "Alisiyad" will almost certainly find something to enjoy in PiA. However, PiA really is in the top level of current web literature as far as simple good writing and storytelling goes, so really everyone here should at least give it a try.