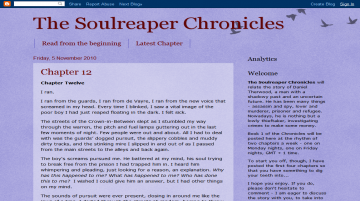 "A murder mystery wrapped in an alternate history dipped in lashings of magic, murder and mayhem"

Thirty years ago, the fae were released. The world changed. Magic returned. And the Isles were covered by an enchanted forest…

Daniel Therwood was a child when the Change occured. Caught up in the events, he received a cursed gift - the ability to steal the souls of other men, both living and dead.

Now working as a thieftaker, solving murders for a price, he does his best with the hand fate has dealt him. When someone leaves a corpse in his bed, though, Daniel is forced on the run from a fellow thieftaker convinced he is the killer.

His quest to clear his name will take him from the ever shifting decks of the Dregs to the rose-scented courts of Arvingal, and into the middle of a mad magician’s deadly plans…

The Soulreaper Chronicles - Thieftaker has not been reviewed yet.

The Soulreaper Chronicles - Thieftaker has not been recommended yet.