The Surprising Life and Death of Diggory Franklin by G.S. Williams 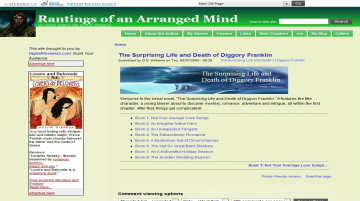 Other reviews by scifichick7

"Lots of Surprises in this Awesome Life" permalink

"The Surprising Life and Death of Diggory Franklin" lives up to its name.

The title character is the son and heir to a rich investor who rivals Warren Buffet and Bill Gates in wealth, but he refuses to be spoiled. He works his way up the corporate ladder on his own as a lawyer, resisting his family's attempts to promote him out of nepotism.

While his life might have been interesting or dull on its own, it's never really a choice for Diggory -- we meet him the same day he meets Calla Wiley, a graduate student in physics. The first time they meet, Calla kisses him passionately and warns him to stay away, at the risk of his own life. He meets her again, just minutes later, and she seems to have no memory of their first encounter.

What Diggory doesn't know yet is that Calla will be inventing a time machine, and blames herself for his future death. And that surprise is just one of many over the course of this epic serial.

The story is divided into convenient "Books," each one with its own principle conflicts and plot, but each contributing to the overall structure of the story. And "structure" is the key word, as every character and plot development has a bigger role to play, with ramifications stretching over time itself.

"Book One: Not your Average Love Songs" starts out the most normal. Diggory has to go about his daily routine while wondering why he's drawn to Calla, and what her secret must be. He suspects that she has bipolar disorder or some other mental flaw that causes her personality changes. He isn't convinced of her time travel until the very end, setting the stage for even more mysteries in "Book Two: An Irregular Action Hero."

The impressive thing about this story is the way it builds. Any one chapter might have humorous dialogue or interesting action, and mysterious cliffhangers. But they build to interesting arcs for each individual Book, so that they each stand out as unique while contributing to the overall tapestry. Events that seemed small at first have greater signficance later, as characters take on bigger roles in Diggory's life, and the stakes are raised as he progresses towards his predicted demise.

Without giving away too much about the surprising plot, let me just say that there's a figure behind the scenes that seems to be manipulating events for a mysterious purpose that involves all of human history.