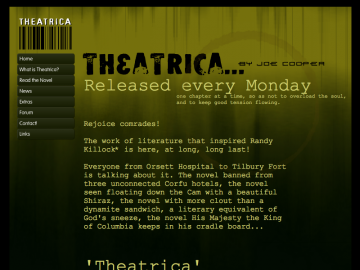 I love ‘quirky and different’, and from what’s evident so far I do believe this novel could be quite exciting.

The opening chapters depict a blunt realistic world in which the various weird and deranged characters’ reactions are combined with recognisable everyday elements, but wrapped in an edgy tense and surreal atmosphere.

I was pleased to see the narrative is fast paced, using some wonderful and unusual descriptions while maintaining a simplistic streak, so it both conjures the Mervyn Peake-ness of which the author speaks, and something more minimalistic that all can easily digest.

I like the moral ambiguity of the main character Arthur, and although the first few chapters depict a rather intense series of happenings, the fourth and latest chapter pivots into something a lot lighter, and very funny. It’s clear that with something like this, which can flip from serious issues to tongue-in-cheek with such colour, is going to be fascinating to follow. The so-called ‘Three Musketeers’ are a treat to read about. The characters are rounded so well.

As for the eponymous city itself… There’s a sinister, decaying feeling to Theatrica, like it’s a city on the verge of collapse. What this may have in store for the future I look forward to finding out.

The web site is easy to follow, simple and easy to use, without looking cheap. The Extras section looks enticing, and it promises extra stories and other related media. Well worth looking at!