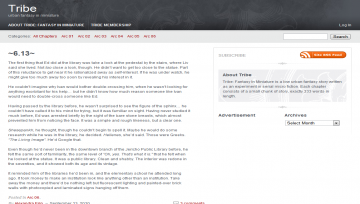 Other reviews by Jason Macias

Based on the first story arc of six, I found this to be an entertaining, reasonably well-written story. The author deliberately restricted herself to chapter installments of exactly 333 words, which I'm sure is an interesting experiment in precision and control from a writer's perspective, but as a reader I think the story would have benefited from more traditional, approximate chapter length limits. Having said that though, she did pull off the trick pretty well, as the installments all seem pretty natural and not rushed or drug out. Also, the very brief chapters make it very easy to dive in and read one or two complete chunks before deciding whether you want to commit to finishing it or not.

I might have given the work a higher rating, but it wasn't really the kind of thing I usually like. If you like your worlds dark(ish), your characters quirky, your fantasy unconventional, and your dialogue arch, you might find this really enjoyable. Even with my usual aversion to this kind of story, it was still interesting, and short, enough that I will go back and finish more of the story arcs later. If my opinion is considerably revised after reading the other character arcs and learning more about the mysterious Tribe, I will revise this review accordingly.