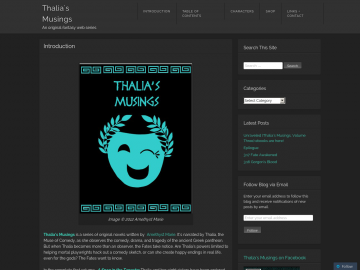 "Thalia must use her powers to keep a young warrior demigoddess safe and alive."

It’s been two years since Thalia last heard from the Fates. She has a new mission from Athena: keep Beroe, daughter of Adonis and Aphrodite, alive. Poseidon wants to make Beroe his new queen and use her as leverage to gain a seat at Zeus’ court. Dionysus wants to marry Beroe and give her a life of hedonistic bliss in his forest. Beroe wants to battle for her own hand and join Artemis’ hunters. And Zeus wants Beroe out of the way because she holds the memories of the dead and claims she’s seen him kill Hera.

All the more reason for Thalia to keep a secret she’s discovered: Hera’s in love. With the mortal King Ixion. And they may have been set up by Athena.

Can Thalia save the people she cares about from becoming collateral damage in Athena’s revolution? Will the revolution succeed before everything comes unraveled?

Unraveled - Thalia's Musings has not been reviewed yet.

Unraveled - Thalia's Musings has not been recommended yet.