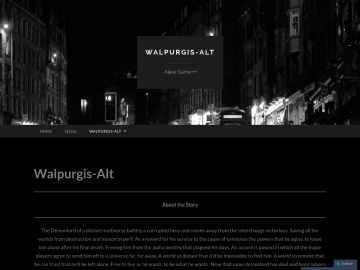 The Demonlord of a distant multiverse battles a corrupted hero and comes away from the interchange victorious. Saving all the worlds from destruction and immortal peril. As a reward for his service to the cause of existence the powers that be agree to leave him alone after his final death. Freeing him from the awful destiny that plagued his days. An accord is passed in which all the major players agree to send him off to a universe far, far away. A world so distant that it’d be impossible to find him. A world so remote that he can trust that he’ll be left alone. Free to live as he wants, to be what he wants. Now that same demonlord has died and been reborn as a young boy named Terrance. A human denizen of a broken war torn world. He has all the memories and a bit of his former powers. Now it’s time to see if he can finally do ‘life’ right.

WALPURGIS-ALT has not been reviewed yet.

WALPURGIS-ALT has not been recommended yet.