This is an old revision of this page, as edited by muses-success at 06:15, 22 July 2012. It may differ significantly from the current revision. 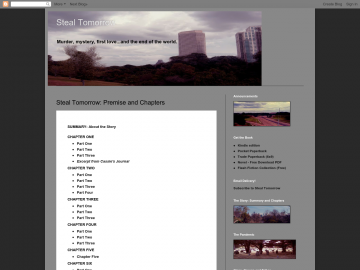 "Murder, mystery, first love...and the end of the world."

In less than a year, Cassie’s life has gone from that of an ordinary teenager to one in which she is struggling to survive in a city marked by petty turf wars and starvation. In a world devastated by a pandemic that spares only the young, she needs a reason to go on living, knowing that she, like the other survivors, will die before her twenty-first birthday.

When she meets a smart and sexy urban forager, it seems things are looking up. She and her friend Leila are invited to move into the five-star Regency Hotel, where a group of teens and children have organized themselves for survival. But Cassie soon realizes everyone has a secret and no one is really safe. Worst of all, the youngest children are disappearing, kidnapped and sold to a mysterious new group on the scene, some of whose leaders look suspiciously like grownups.

If the adults aren’t all dead, where are they hiding, and what do they want with the children? Is it true that there might be a cure for Telo? Cassie and her new friends must find out before more people disappear and before they all die of the same disease that got them into this fix in the first place.

Steal Tomorrow has not been reviewed yet.

Steal Tomorrow has not been recommended yet.