This is an old revision of this page, as edited by muses-success at 07:28, 10 December 2015. It may differ significantly from the current revision. 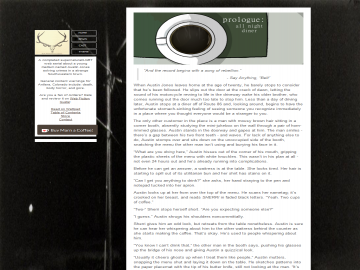 "A serialized writing project about Austin Jones and the several years he spent away from home."

A serialized writing project about Austin Jones and the several years he spent away from home. Austin Jones, a budding medium, flees from his home in Havenwood, PA in the year 1999. He is running from a predestined position at the Department of Paranormal Research, an agency his family has run for decades. The ghost of his father, Richard, follows him.

In the fall of 2000, Austin finds himself in the town of Antlers, Colorado, cut off from the family bank account by his older brother and shacking up with easygoing med student Otter Redford. In search of a job, Austin finds himself an unwitting consultant to Sheriff Monty Maxwell and her deputy Mac, who take advantage of Austin’s mediumship to unravel the origins of the strange cases that only seem to happen in Antlers.

Antlers, CO is equal parts horror, humor, supernatural, and Southwestern gothic, with a cast of diverse, LGBT protagonists. It deals with themes of displacement, loss, familial loyalties, concepts of home and differences as strengths.

Antlers updates every other Thursday.

Antlers, Colorado has not been reviewed yet.

Antlers, Colorado has not been recommended yet.