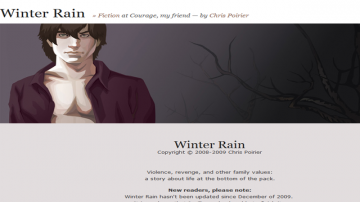 "Solid Premise and Style, Too Much Angst, and Currently Not Updating"

One of the biggest things I appreciated about Winter Rain was Chris’ pace during the early installments. He gave details as they would occur to the point-of-view character, allowing them to unfold as the reader went on, as opposed to explaining everything for the benefit of the reader. I REALLY prefer the former style to the latter. I don’t want to be told what’s going on, I want to find out.

I’m not used to reading first person fiction, but Chris did a pretty good job with it. Most of the time it flowed, with the occasional glitch.

I really liked the pragmatic take on werewolf culture and the decided lack of high drama. The early and increasing angst on the part of the main character, however, was quite a turn off. I was reading regularly and checking for updates up until the story ground to a halt. The last few chapters, while I liked their premise, were inundated with angst and redundancy. Several times I felt like I was reading the same chapter over again. I think it would be great if the story picked back up and was able to move past the angst, because I feel like it has a lot of potential.