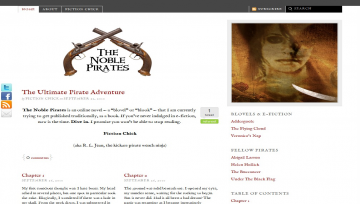 Other reviews by thip

"Sass meets swashbuckling, and it's a rich, rich adventure"

In the words of author Rima L. Jean (RLJ) herself in her intro to the "Noble Pirates" blog serial : "What is your fiction about? It’s about time travel and pirates." And what time travel, and what pirates!

The story’s heroine, a modern-day, workaholic, sassy lady falls overboard during a vacation close to the famed Bermuda Triangle. After reluctantly submitting to what she thinks is her demise by drowning, our heroine regains consciousness aboard a sailing ship full of pirate reenactors that talk so odd and smell so bad that she vomits and gets worried that something is rotten in the current state of reality. When she sees the first town ashore with no hotels and BMWs, she realizes that the pirates just may not be reenactors after all. RLJ’s prose puts one right there with the heroine, her rising panic, and her tortured sense of smell. It’s moving, hilarious and rich as the taste of spizy food in a smoky 18th century Caribbean tavern that RLJ so richly evokes. The constant clash between modern-day sensibilities and 18th century lack of it could be described by anyone, but RLJ leaves other authors standing in her gradual unfolding of how the heroine gets used to it, like a new wristwatch you gradually cease to feel on your arm.

While growing into her new sorroundings, our heroine meets the pirates of the story’s title, some rougly noble, some anything but. Lest you think this is a some kind of National Geographic feature, let me tell you right away there’s enough swashbuckling adventure in "Noble Pirates" to make two Douglas Fairbankses happy. Tolerated on a succession of pirate ships as a doctor (in that world, cleaning a wound is advanced medicine!), our heroine struggles with rig climbing and fencing (choking and fumbling like we’d all do), and with her attraction to several of the noble(r) pirates of the Caribbean. The Caribbean itself is lovingly evoked, blue waters and smoky shanty towns and all, RLJ has a rare talent for making one’s comfy armchair disappear, as your senses fill up with the sights and sounds and smells and tastes of a bygone world. Our heroine is on the verge of despair at the impossibility of returning to her own time period when a mysterious prophecy from a voodoo truthteller foretells of a mysterious black pirate that will aid her in her quest - if she can only find him.

I will spoil none of the delightful twists and turns by telling, RLJ gives us almost eighty chapters of this addictive stuff and it is not one too many.