The Wandering Inn by pirateaba 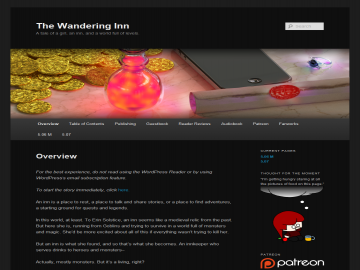 Other reviews by SBB

The Wandering Inn by pirateaba product Read This
Permalink

This story is largely slice of life though it will have a huge amount of combat, violence, intrigue, drama, and magic. But a staggeringly huge slice of life in a fantasy world is the best way to think of it.

For experienced readers, they will love the trope subversion, the diversity of the cast, the unique magical races, the LITRPG aspects, and how everyone takes the weirdness of their world for granted.

The downside, the scope of this story is so massive that it takes a long time to hit its stride. RElative to the length of the story it is tiny but it will be difficult for some when they start. Also, the way our friend the running Muay Thai lady is written is very jarring. Her voice stays distinct but the sometimes annoying way her character was originally written goes away.

I' de say wait until the upstairs is cleaned and until the adventurers become fixtures of the inn before you start judging.

Chapters are long and some of the dramatic speeches go a bit long but again, compared to the massive amount of content that gets put out several times a week it isn't even a blip of the radar.

This author is one of the most prolific professional writers out there and she deserves to be one of the few people able to live off her writing. This is a great master's class on how characters all have different 'normals' and how to have your characters tackle problems in ways that are consistent with their own motivation and capabilities.

(dragon and the cookie game scene was so amazing and so funny I almost lost my job reading it at work. Would have been worth it even if they fired me.)