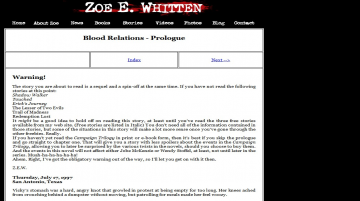 "Would you become a monster for love?"

Halfling and fledgling mage Amber McKenzie has fled from Arizona with Vicky the vampire to avoid the law. Marcus has walked out on Amber, and in his absence, Vicky and Amber find themselves growing closer together, each of them desperate to ease the ache of loneliness.

While hiding out in San Antonio, Vicky encounters Emil, an ancient vampire and leader of a small coven. Vicky hopes to become a part of the coven to have children, until Emil drops the bombshell that Vicky is sterile. Believing that she is the cause for Vicky’s condition, a guilt-stricken Amber volunteers to become Vicky’s surrogate mother. The process of carrying a vampire child is dangerous, and if it doesn’t kill Amber, the developing fetus will still destroy her humanity by turning her into a blood drinker, the thing she fears most.

Just as Amber is adjusting to the changes of being pregnant, the coven is surprised by the arrival of a dangerous party crasher. Dimitri is a wyrm, an ancient race of blood drinker who has become obsessed with Amber. Outclassing the entire coven, Dimitri poisons Amber without provocation and kidnaps her, sending the coven into a blind panic. What are his plans for her? Can Vicky save her partner? Or will Dimitri triumph and create the perfect monster?

Blood Relations has not been reviewed yet.

Blood Relations has not been recommended yet.