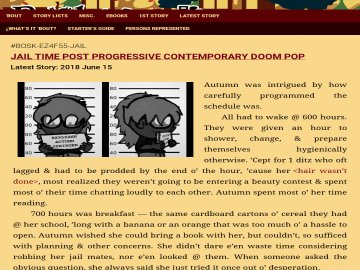 Boskeopolis is an obscure city-state, notable for its persistent violation o’ the laws o’ physics, biology, & economics — though, to be fair, real life doesn’t obey that last 1, either.

Within that city dwelled a perfectionist thief named Autumn Springer, who — with her timid skeletal partner, Edgar Winters, & sometimes with his cheerful chemist friend, Dawn Summers — would go on heists & explore wild lands for treasure. That is, when she wasn’t mired in the various political, environmental, or personal calamities created by Boskeopolis’s other peculiar citizens; or wasn’t dug into domestic concerns o’ work, errands, & her relationship with Edgar; or wasn’t burdened by her own chaotic mental state.

Boskeopolis Stories has not been reviewed yet.

Boskeopolis Stories has not been recommended yet.