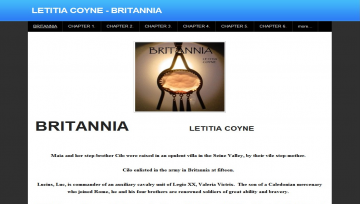 Maia and her step-brother Cilo were raised in an opulent villa in the Seine Valley, by their vile step-mother.

Cilo enlisted in the army in Britannia at fifteen.

Lucius, Luc, is commander of an auxiliary cavalry unit of Legio XX, Valeria Victrix.  The son of a Caledonian mercenary who joined Rome, he and his four brothers are renowned soldiers of great ability and bravery.

At 25 he has served ten years, is looking at another fifteen, and has had enough of killing.  Exhausted and battle fatigued after the brutal AD77 Cambrian campaign, he has been weighing up his chances of survival as a deserter.

When Maia is married off to her stepbrother, she is once again abandoned when he returns to Britannia.  Seizing her chance to escape, she joins an exclusive group of travelling priestesses on their way to Britannia.  But they can only take her some of the way, and she finds herself moving through a complex web of lies and deceptions, where everyone she meets has a separate agenda.

If she can only trust Lucius, he can take her to her husband.  Everything she knows about the world will change, if she can survive the journey.

BRITANNIA has not been tagged yet. Help others find BRITANNIA by tagging it!

BRITANNIA has not been reviewed yet.

BRITANNIA has not been recommended yet.