Less Than Heroic by M.K. Moore 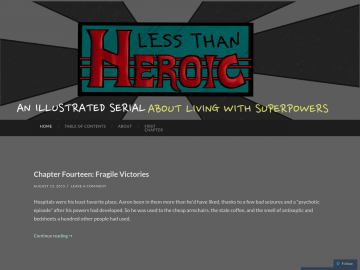 "They're trying to be heroes. She's trying to stop."

Having super powers isn’t always fun. For Molly, it means isolation, dangerous impulses, and a hero complex that gets her in trouble as much as it helps anyone. For Aaron, it means crippling headaches, nightmares, and medication for a condition he doesn’t have.

When Molly’s thrill-seeking gains her a reputation as a dangerous vigilante, her father forces her to move somewhere remote, hoping for one last chance at a normal life. But Laurence Lake isn’t as quiet as it seems to be, and while she’s trying to stay out of trouble, Aaron and his friends are seeking it out. And even though they have powers, they’re not exactly heroes. Their attempts to stop impending disaster may end up causing something worse…

Less Than Heroic has not been reviewed yet.

Less Than Heroic has not been recommended yet.