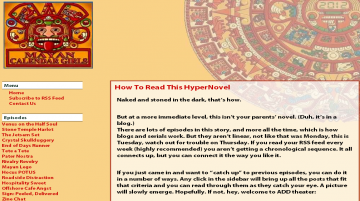 I suppose I should be ranting about how sexist this whole thing is.  I mean, the video alone . . .  Reducing the End Of The World to cheesecake and frat snickers?  Awful.

Trouble is, I find myself getting a big kick out of this.  It helps they led off with Aphra, the industrial spy described as "Indiana Jones meets Cleopatra Jones" at one point.  She goes beyond sassy and it’s a scream that she’s working for a redneck Republican while her competition in dirty tricks is like "superWhiteBoy" working for the Committee to ReElect.  "Do they still call it "CREEP"?"  Aphra asks.  "I can see why."  Later, when her predatory sexuality comes out to get frisky, she’s even more of a scream.  I could really see her as the young Ertha Kitt.

Then you’ve got Curtsy, blonde all over, you might say, and a dolphin groupie.  Horrifying and sick, of course.  But I gotta say, I could kind of go with her.  She’s hot for dolphins (like so many girls out there taking marine science)  but actually does something about it.  And I wonder if she’ll get past that and hook up with the nice Mayan boy.  Apparently the disembodied Goddess or whatever is overlooking all this agrees.

I like the spunk of Charity, the redhead fire dancer, but who really grabbed me after a slow start is Xchab.  We’re so used to Indians being such noble redpersons in fiction, it’s a little odd to see the petulant, teenaged Xchab yearning to break out of the "Mayan village people" life and become a little punker with money and cool cell phones like she dreams of. And watching her head get twisted when she runs into the crystal skull who seems to be orchestraing this thing,  Charity tarting her up and taking her to a strip club to learn a trade, and seeing a briefcase of dollars change hands.  Her approach/avoidance of modern culture is touching and funny.

The men are all pigs, of course.  But they’ll do.

This is pretty wild, and as good a way to take off on the whole 2012 thing as any other I’ve seen.