Mother of Exiles by Noah Buchanan 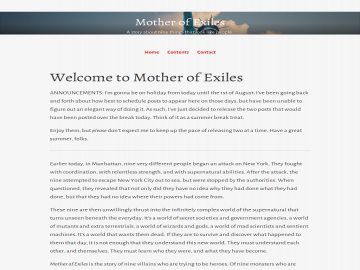 "A story about nine things that look like people."

Earlier today, in Manhattan, nine very different people began an attack on New York. They fought with coordination, with relentless strength, and with supernatural abilities. After the attack, the nine attempted to escape New York City out to sea, but were stopped by the authorities. When questioned, they revealed that not only did they have no idea why they had done what they had done, but that they had no idea where their powers had come from.

These nine are then unwillingly thrust into the infinitely complex world of the supernatural that turns unseen beneath the everyday. It’s a world of secret societies and government agencies, a world of mutants and extra terrestrials, a world of wizards and gods, a world of mad scientists and sentient machines. It’s a world that wants them dead. If they are to survive and discover what happened to them that day, it is not enough that they understand this new world. They must understand each other, and themselves. They must learn who they were, and what they have become.

Mother of Exiles is a speculative fiction web serial that combines elements of the science fiction, fantasy, and superhero genres. It draws a lot of inspiration from superhero comicbooks and written fiction, most notably the Marvel Universe and the web serial Worm, by Wildbow.

Though it does have a lot of fun, sci-fi / fantasy elements (there’s fight scenes, super powers, and huge secrets that unfold), the story is pretty grounded a lot of the time, so please don’t expect a climactic fight complete with pithy one-liners every chapter. Not to say of course that there won’t be climactic fights complete with pithy one-liners, just less often than you might expect. In terms of tone, there’s quite a bit of swearing, some depictions of violence (though rarely graphic), and sexual subjects are referenced. Outside of that, there are a lot of ‘adult themes’ that aren’t swearing, violence, or sex that get depicted. I won’t say that children shouldn’t read it (I read some pretty age-inappropriate stuff as a child), but please use common sense.

Feel free to leave comments and input. The table of contents can be found here, but if you’d prefer to just read the first chapter, you can find it here. New chapters are posted every Monday and Friday.

Mother of Exiles has not been reviewed yet.

Mother of Exiles has not been recommended yet.