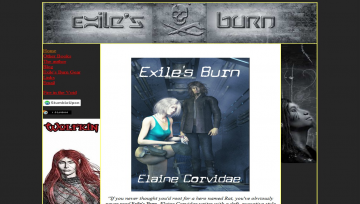 Short summary: Zats rule the universe, and they are evil. The main characters are part of a rebel ship, fighting against the Zats. But they are all also misfits and outcasts, with no home other than their battered ship . . . .

Compellingly written, this story takes you through every emotion in the book, my most vivid memory being of breaking down into tears halfway through.

However, I did find that most of the characters were initially very hard to connect with, as they are all filled with quiet despair and inner turmoil, hardly seeming to have lives outside of their battle with the Zats. It is only quite late in the novel that their hidden depths are shown, but this is perhaps in character with the setting, which is bleak and dystopian.

Overall, I really enjoyed reading this. The plot is perhaps a little plodding in parts, but the characters, and their reactions to their bleak situation, is oddly fascinating, almost like watching a car crash in slow motion.

The novel ends on a hopeful note, with a clear opening for a sequel, which I will definitely make sure to check out.