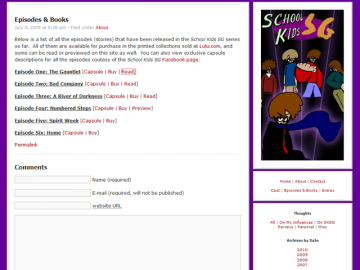 Initially I thought I had linked to the wrong site, as it appeared to be someone’s personal blog. After I had found the link to the main story, I was frustrated by the lack of links to the next chapter. Although a print version was offered, it wasn’t free. I’m not sure how you would want to link between each page at this point, but is essential.

On to the story. The prologue hints at greater things that will befall the high school kids of this novel, and also inconspicuously set the time as being in the future (confirmed in a comment on this post). The first couple of chapters are short, but probably about the right length if you were looking for something to draw teens into reading. Which is the whole point, as this novel is aimed at young adults.

Correspondingly, the characters appeared simple, with the protagonist easily demonstrating his desire for notoriety. Further chapters outlined the more reserved supporting characters, who I empathised more with.

Maybe I was just too old for this story, but I didn’t find it as interesting as promised by the prologue. (And did I mention that the constant flipping though pages to find the next chapter bugged me?) The other two books in the series may offer more.