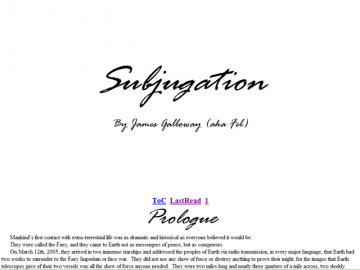 I have mixed feelings about this story. On one hand, I have a laundry list of dislikes about it. On the other hand, I did read through the whole novel (although I was skimming some toward the end) and I don’t regret doing so. The result is going to be a long review. The short version: don’t be afraid to read it, but certainly not a favorite of mine.

As the description says, this story is about Jason Fox, a college student who’s living through the subjugation of Earth by the matriarchal alien race called Faey. He ends up in a relationship with one of the Faey marine, and things sorta snowball from there. A lot. This is a long, complete novel with a packed plot. It’s written solidly and coherently, so if you do get into it, it’s worth reading all the way through.

The most annoying part about the story is the inconsistent formatting. The prologue & first chapter are literally a wall of text, because there is no space between the paragraphs. It doesn’t help that those paragraphs are large chunks of info-dumping. In later chapters, the paragraphs are separated by an extra return, plus the appearance of dialogue and action breaks up the text. Unfortunately the spacing disappears again in some later chapters, and in one chapter the font size is significantly smaller than in the rest of the novel. Very distracting. There’s also a couple spots where it looks like the characters originally had different names, and those prior versions accidentally got left in. A couple spelling errors also caught my eye (one word in particular is used significantly a couple times, and each time spelled incorrectly).

Those who have read other reviews by me know that simple things that can be caught by spell-checking, proof-reading, etc. really bug me. Fix it, please!!

As for the story’s content, the plotting and characters are mostly well done, although there isn’t a whole lot of personal development going on. Jason’s attitudes toward the Faey as an empire and as individuals is about the only personality trait that change at all – although that particular struggle does end up being the core tension of the story. Unfortunately, I was annoyed to find that many instances illustrating Jason’s struggle happens in the context of whether or not he should have sex with the oh-so-luscious-and-willing aliens. (sarcasm alert: the poor boy!).

Note: Feminists, this is not your story. Especially since the female Faey act and are described in-story on a number of occasions as basically like stereotypical human men, only with really sexy curvy blue-skinned bodies. Except, of course, it turns out that all these bad-ass blue gals are super happy to become mommies later on in the story. Gah!

I also have a few quibbles relating to the over-done nature of some of the tropes used in the story (sexy alien babes, telepathic sex, aliens as the sources of old Earth legends, etc.). Aside from that, though, the story has a perfectly serviceable scifi free-the-earth-from-conquest plot.

Some people will enjoy this story. Many others will probably find it to be "meh". You’ll probably have to try it for yourself to see which reaction you have.