The Chosen by Haley Malin 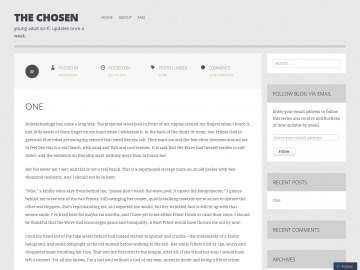 "Humanity reached for the stars, and found gods instead"

Thousands of years in the future, Earth is a dead, deserted world. Humanity has lived aboard nomadic starships for millennia, and the planets that once fascinated scientists are now revered as gods. This is not without reason: every year, certain children are Chosen by the celestial deities and given remarkable powers. They become celebrities, enjoying more luxury than anyone could dream – but are taken away from their families and stripped of their freedom.

Luce is the daughter of a scientist with a dark secret. He is an atheist, and does not believe that the great planets are godly at all. Luce doesn’t concern herself with matters of theology, until one day, the impossible happens. The Silver God – the orb of light that sits alongside the mysterious old Earth – Chooses her. Those Chosen by the Silver God are predestined to change the course of history through a single great act that invariably takes their lives.

But Luce doesn’t want to change history. She’s only ever wanted a quiet life, with food and warmth and a father who doesn’t have to move from ship to ship to hide his identity. With average looks, average grades, and no special talents, she’s hardly the type one would expect to lead mankind into a new era.

So why did the Silver God pick her to stop the oncoming doom of the human race?

And, more importantly, how can she get out of it alive?

The Chosen has not been tagged yet. Help others find The Chosen by tagging it!

The Chosen has not been reviewed yet.

The Chosen has not been recommended yet.