The God Eaters by Jesse Hajicek 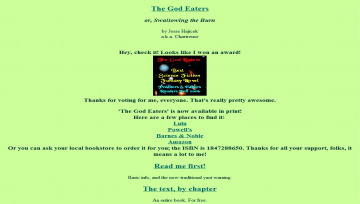 "Not My Cup of Tea Despite Everything" permalink

I had seen this one floating around WFG for a while, but I never went to read it until I realized the author was also the co-author of the very awesome Metanoia webcomic (on frequent hiatus, alas), and I got pretty excited.

God Eaters has some definite thematic parallels to Metanoia (in fact, just take the same phenotypes of the main characters and reverse the roles), which makes me wonder if this was a prototype for the webcomic, or vice versa. Or maybe the author just enjoys those themes. I’ve gotten through 17 of 31 chapters, and I’m not sure I can do much more than skim the rest out of curiosity. It has many of the stock slightly edgy yaoi romance elements: killers and innocents, virgins and whores, hurt-comfort, prostitution, forbidden homosexuality, and sexual love healing wounded souls (which I personally think is a cultural fallacy that can be dangerous to reinforce), but much better written than the usual fare. There is much candy-tastic description of hair, eyes, voices, skin, etc. Usually the only time I go for stories like like this is when I’m straight up looking for porn, which this has very little of as far as I’ve read (and possibly not in the places the author intended).

I’m more a fan of execution in stories than content, and God Eaters is an example of my least favorite form of storytelling. Other commenters have noted the weakness of the preface, which pretty much outlines what’s going to happen in the rest of the story. I’m given information every step of the way, a fairly constant stream of personal, cultural, geographic, and mythological explanations. I’m never left to wonder. I felt no sense of discovery or anticipation when reading. The pacing is pretty much the same throughout the story, making it feel like a steady flow of water without any change in the current or direction. I didn’t feel any building momentum, or any slow savoring. An incredibly touching scene of hair combing after trauma is given fewer words and as much emotional space as a robbery.

There is some really engaging description of godhood and visions, and the occasional razor-sharp insight into the physical practicality of things. I appreciate the places where the author steps away from the tropes of this genre, and both main characters seem to have more self-awareness around healthy relationship dynamics than the average story of this type, though the "I can’t live without you you’re the only person I can ever feel connected to" shtick is still pretty strong.

If you want a pretty well written yaoi romance with the elements listed above, you might very well enjoy this immensely. But despite my love of the author’s other work, and my general interest in yaoi that involves a lot of bleeding, God Eaters isn’t for me.