The Inuyama Rebellion by Robyn Paterson 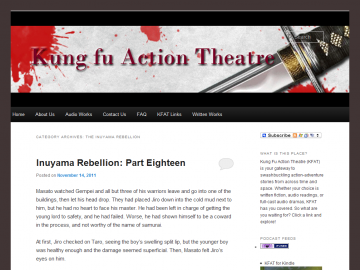 Audience: Anyone from 8 to 108 who enjoys adventure stories.

"On the eve of war, a mother's desperate bid to save her children sends two samurai into enemy territory. "

The Sengoku Jidai was an age of nearly constant warfare in Japanese history, clans struggled endlessly against other clans and today’s ally might be tomorrow’s enemy. The proud Inuyama clan, once driven nearly to the brink of extinction by their hated rivals the Kurokawa clan, have finally grown in strength enough to face their enemies in a battle for their freedom. But this freedom will have many costs, for the peace that bought them the time to secretly rearm was paid for with the clan lord’s own sons- held hostage by the Kurokawa in a bargain of peace. Knowing that the declaration of independence will surely bring the deaths of her sons, the clan lord’s wife, Lady Murasaki, has secretly dispatched two of the clan’s samurai -the elder Jiro and his apprentice Masato- to Kurokawa lands in an effort to rescue the boys. But even now as the two men leave the castle on their mission, in other parts of Inuyama castle a shadow falls over Hasagawa Yohei, trusted minister of Lord Inuyama…

The Inuyama Rebellion has not been reviewed yet.

The Inuyama Rebellion has not been recommended yet.