The Radical Chronicles by Tim Peacock 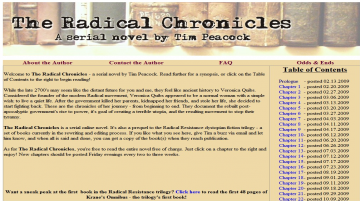 "In a bleak future, the fate of many will rest on one woman's shoulders."

In the distant post-apocalyptic future after what most of us would consider to be the end of the world, people begin losing hope. With a power-hungry government hell-bent on creating the perfect utopia, you’ll venture through a world filled with genocide, torture, ruthless spies and double agents, and a resistance movement aimed at saving those targeted by the government for extermination.

The Radical Chronicles is a serial novel as well as a prequel to the Radical Resistance dystopian fiction trilogy. The serial features a spunky red head named Veronica who decides to begin fighting back after the government kills her parents, kidnaps her friends, and steals her life. The story begins two hundred years before the events of the trilogy and focuses on the rise of government power, the beginning of mass chaos, and the formation of the resistance movement.

The Radical Chronicles has not been reviewed yet.

The Radical Chronicles has not been recommended yet.