The Wonderland Effect by Robert Arrington 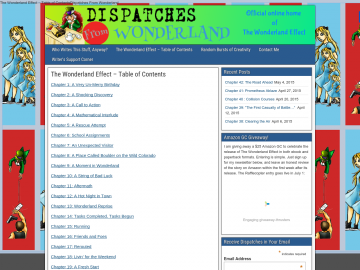 Audience: Teens and up

After she accidentally poisoned herself on her eighth birthday, Alice Littleton recovered and discovered she had gained super powers with parallels in the writings of her favorite author, Lewis Carroll. Powers were unknown in her world, so her parents made her promise to hide her abilities. But keeping secrets isn't easy when the denizens of Wonderland keep showing up unannounced.

After she turned sixteen, Alice's actions brought her to the attention of a shadowy organization that seemed intent on recruiting or eliminating anyone with powers. Alice and her father were forced to go on the run. Will Prometheus Academy, with its empowered student body, prove to be the safe haven they're searching for?

The Wonderland Effect has not been reviewed yet.

The Wonderland Effect has not been recommended yet.