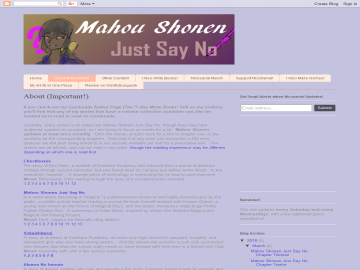 "Character Driven Stories with an Air of Conspiracy"

Yokaishiteru! The namesake of this site. A story of students at Korekara Academy, an invite-only high school for wayward, troubled, and delinquent girls who also have strong talents... And the demon the school's occult club summoned, who decides that what the school really needs to move forward with their lives is a School Idol Club.

Checkboxes The story of Box Hako, a student of Korekara Academy who returned from a period of absence midway through second semester, but was found dead on campus just before winter break. In the meantime, however... A strange piece of technology is instructing her on how to save everyone.

Akuma No Imouto A story of demon siblings who own and operate a bar that's a popular hangout both for mortals and for other demons who are in the human world for one reason or another. This bar has another purpose, however; collecting secrets. Though the spell through which they are collected is supposed to leave no memory of the target's mental landscape, Nagito, the elder sibling, finds himself remembering all the deepest, darkest thoughts of the bar's patrons.

Coming Soon; Mahou Shonen Just Say No In a world where becoming a "magica" is a phenomenon known to and highly frowned upon by the public, a middle school teacher leading a normal life finds himself involved with Horace Giorno, a young man known as the Prince of Magical Boys, and the brutal, murderous magical girl Pretty Fighter Ribbon Red. A subversion of Sailor Moon, inspired by shows like Madoka Magica and Magical Girl Raising Project.

24 Doors: (In Promotional Phase) 24 People have been kidnapped and told to play a game. The game consists of walking through doors, then figuring out the obscure ways to get out on the other side; obscure ways usually made of such things as 'discuss your family'. The doors must be entered in even groups. 24 Divides into quite a lot of numbers, but if anything were to happen to even one person, things would get a lot more complicated. 24 Doors will be an interactive story once it begins, hence the promotional phase's existence. If all goes well, it will begin in January 2018.

Dear Diary On Semi-permanent Hiatus A group of teens growing up at a lake in Connecticut have been asked to keep a journal by one of their peers; local wallflower, Maria Ramirez. These journals serve as the documentation of the most important time in their lives as they grow and change, becoming better people than they were before. Only Chapter One is available at this time.

Yokaishiteru! has not been reviewed yet.

Yokaishiteru! has not been recommended yet.