The Antithesis by T.L. Whiteman 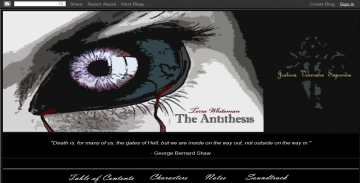 Other reviews by intergal

The initial concept behind ‘The Antithesis’ is intriguing, and comes across as ‘Dollhouse’ meets ‘Dogma’ with some time travel thrown in at first glance. Our main character, Alezair is a ‘marionette’ owned by the Nexus, whose mission is hijacked by a mysterious woman. Currently, the story as at 3 chapters, and will be updated once weekly.

The dialogue is fun and interesting, and Alezair’s introspection is usually quite snappy and sarcastic. The location switches appear to be well described – as a Japanese major, it was a joy, nay a miracle NOT to be annoyed by descriptions of ancient Japan!

On one occasion, the descriptions of the Mysterious Woman can come across purplish prose, but I concede that this could be a word choice preference on my part, and it certainly did not impede my reading on.

The story seems to be steadily working on bring certain reveals and bigger mysteries as well – we’re still finding out about what precisely the Nexus entails. I’m looking forward to see what the future instalments will bring, and will definitely be reading on.

It is hard to classify The Antithesis. I would say, so far, it is a supernatural sci-fi horror with undertones of romance. I hesitated between giving this story 7 or 8 stars as there isn’t much up yet (only 6 chapters) and I was a little hesitant about rating something highly with so little up. But The Antithesis has strong writing, interesting characters, and is overall a promising beginning, so I’ve decided to put my faith in the author.

PLOT: A number of reviewers have drawn comparisons between Antithesis and Dollhouse, but I think this is a misleading comparison to make. Yes, the main character Alezair is a puppet for what seems to be a large (evil?) corporation. Yes, he is sent out on missions, and his mind is wiped clean after each. But the story begins when Alezair — during the course of a mission — sees a mysterious woman and goes rogue, leaving everything he knows behind him. Fuelled by curiosity and a strange infatuation, Alezair decides to track down this woman across time only to be drawn into her world; a world of secrets, death, and justice.

THOUGHTS: If the name Alezair hadn’t given it away, Antithesis has strong supernatural elements to it — Alezair and the woman, Leid, are both non-humans (although what they are exactly isn’t yet clear). As a matter of fact, one aspect that drew me into the story is the way the author handles the fantastical elements — the supernatural beings described are unlike anything I’ve encountered before, and I get the feeling that the world-building is going to continue to fascinate me.

The romance side of things is rather underplayed as it’s mostly one-sided, but it’s wittingly handled and the relationship between Alezair and Leid is pretty entertaining, particularly because Leid has a lot more answers than she’s giving.

Of course, there are as yet only six chapters up so it’s hard to judge the storyline, but Antithesis does promise some rather exciting plot developments, particularly after the events in Chapter 4, when Alezair finally gets more than two sentences out of Leid. I am finding it a little hard to predict where the story will go next, but I sense more mysteries and more hidden political machinations — and of course we still need to figure out what Nexus is and how Alezair ended up being a doll there.

The writing itself is quite strong, perhaps a little description-heavy at times but even that is well done. The actions sequences were particularly well-written, and there’s a scene on a plane that made my skin crawl just a little.

I would say the strongest aspect of the writing is that it has a very distinctive voice. It’s written in first person, with Alezair being the sarcastic and insightful narrator, but even the dialogue shows strong characterization.

As for the website itself: while I don’t mind light text on dark backgrounds, I did dislike the fact that the layout wasn’t entirely consistent — Chapters 5 and 6 seem to have a slightly smaller font size (I preferred it larger). On the plus side though, there is some pretty awesome artwork preceding each chapter, which added to the atmosphere and reading experience.

In sum, while I hate to make judgements with so little posted, I do think this story is worth checking out, particularly for the cross-genre lovers — the writing is solid, and the author has laid out the foundations for an exciting and intriguing and most of all unique world.

The Antithesis bills itself as a horror/sci-fi /dark romance series. From the three chapters which are up so far this seems like a fair assessment. I've seen other reviewers compare it to "Dollhouse" but with supernatural elements. I've never actually watched "Dollhouse", but I know enough about the premise to say I see why they say that.

The main character is the non-human servant of a force called the Nexus. After each mission he is mind-wiped and put back on the shelf until he's needed again. So far I see the resemblence, but Alezair goes rogue at the start of the story to track down the mysterious woman.

The writing is solid, and the premise interesting. I'm not a great one for romance, but the dynamic between the two-some and the whole mystery of what's going on are good. I'm curious to know how this pans out. The main character seems real and has an interesting voice. In general the first three chapters make for a strong start.

The layout. It's not that it's white on black (though it is and if you hate that be advised) but that it's inconsistent. Sometimes the author leaves a line between paragraphs and sometimes they don't. Personally, I wish they'd leave one between all lines, but it would be tolerable if it was the other way as well. I also find there's too much sidebar and not enough main text section for my liking, but that's a matter of taste.

The Antithesis is an interesting piece of web fiction and is off to a strong start. The layout isn't the best, but if you can see past that and like dark fantasy and horror it's worth a look.

"Beautifully written, the beginning of a great novel. " permalink

Currently, I’ve read three of the four chapters that are up in this serialized novel. A new chapter is being published every Friday. The story so far follows two characters, Alezair and Leid, as they travel through different time periods. Alezair is infatuated with the mysterious Leid after their first meeting during a battle in 1180 A.D era Jerusalem. From there he finds her again but this time during the Sengoku period of Japan. Once again both characters are engaged in battle but so much more is happening as the writer develops the characters and mystery that surrounds both of them. The writer’s ability to describe action sequences is some of the best I’ve read. Historical events paired with this descriptive writing style, I get a sense of being transported to where the characters are as Alezair works to undercover clues about himself and why he keeps running into Leid during history altering events. I think this is a big clue for where the story is heading as in Chapter Three we get to sit down with Leid in a modern day club. The chapter leaves us hanging as Alezair convinces Leid to tell him what exactly she is. As Leid says, “Just remember, you asked.” I can’t help but grab Alezair’s hand and jump head first into whatever Leid has in store for us.

As for the layout of the blog, I’ve read the other reviewer’s comment about not liking the white text on black background. I actually prefer reading things on my computer screen in this format. My iPhone Kindle application is configured the same exact way. It’s easier on my eyes for some reason. It all comes down to preference really.

I’d like to thank the author for a wonderful start to a book that I’ll be inserting into my busy schedule. Now I’m off to find out what is in store for Alezair as I begin Chapter Four.